A few years ago, Sophie and her mum Andrea were preparing themselves for Sophie’s first night at her local Beavers club. They knew there would be someone there to teach the children first aid. But they had no idea just how soon Sophie would need her first aid skills, and what a difference it would make to both their lives.

“I think everyone should learn first aid in schools. If something happens everyone would be able to use it. They wouldn’t have to panic. They would stay calm and know what to do and save someone.”

“On the Tuesday night Sophie had her first night at Beavers,” said Andrea. “It just so happened they did a first aid course that night. Sophie is quite a shy girl and doesn’t get involved in new things very easily.”

The children learned what to do if someone burns themselves and how to help someone who is unresponsive and breathing. Sophie – who is the second youngest of Andrea’s five daughters – said: “I thought it would be useful just in case. But I didn’t think I’d have to use it."

Putting Sophie’s skills to use

“I woke up about six o’clock in morning,” said Andrea. “I felt really strange. “We live in a three-storey house and I’d managed to get down to the middle floor for a glass of water. As I went out into the hallway I felt really peculiar. I collapsed to the floor but I was still awake.”

“I couldn’t move – I was trying to move my arms and legs but nothing was working.  Literally that’s when Sophie came down the stairs. I saw her out the corner of my eye and that was when I blacked out.”

Sophie had appeared at just the right time. She rushed to her mum’s side and, without thinking about it, put what she’d learned the night before at Beavers into practice.

“I felt a bit scared,” said Sophie. “Her eyes were half open and half closed. I remembered what I’d done the night before.” Sophie had been taught how to check whether her mum was breathing by tilting her head back and looking, listening and feeling for breaths. Sophie found that her mum was still breathing. “I put her on her side with her head back, so if she was sick it wouldn’t go back in,” she said. It’s important to put someone who is unresponsive and breathing on their side and tilt their head back so if they are sick, they won’t choke.

Sophie called 999 and woke her sisters – aged 12, 14 and 17 – and dad up before returning to her mum’s side and checking she was still breathing. “I was really scared and my heart was beating really fast.”

“I woke up on my side,” recalled Andrea. “I had all the girls around me. She [Sophie] had done a good job of calming her older sisters, who were all panicking. “I don’t know how she stayed so calm – she’s normally quite a hyper, busy little thing. She was the only one that stayed calm. When I came around Sophie was above my head whispering and stroking my hair. She was calming the other girls. She helped me to the sofa and sat with me for a while. I was just happy that I could move again, and that it was temporary.”

The ambulance Sophie had called arrived. Andrea was taken to be checked out by a doctor and was ultimately given the all-clear.

“I felt mixed emotions,” said Sophie, “I didn’t know how to feel. I felt relieved that mum was okay. Now I feel proud because I was only six and I’ve done more than what a cub or a scout might do.”

“She kept checking on me every five minutes.” added Andrea. “For about a week, I think. I’m very proud of her.”

The importance of learning first aid

Most people in the UK lack the confidence or skills to give first aid in an emergency. A British Red Cross study found that up to 59 per cent of deaths from injuries could have been prevented if first aid had been given before emergency medical services arrived.

In Sophie’s case, a short evening of first aid knowledge gave her the confidence to help her mum when she needed it most. “I think first aid education is so important,” said Andrea.

Sophie added: “I think everyone should learn first aid in schools. If something happens everyone would be able to use it. They wouldn’t have to panic. They would stay calm and know what to do and save someone.” 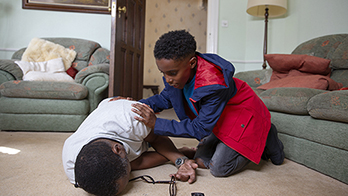 Learn and practise eight different first aid skills you can use to help others.

Learn about kindness and practise how to cope and keep calm.

Learn and practise how to keep safe when helping others.

Go to Guidance and support

No, I want to find out more